Top tips for surviving in Singapore and getting your fix of society and culture.

2 weeks ago, I wrote about arriving in Singapore for the first time and being blown away by its unique combination of stunning high rise architecture, lush tropical greenery, melting pot of cultures and, oxymoron alert, its confident, yet refined, ostentation.

I’ve also written about the advantages for entrepreneurs relocating business or opening a branch in Singapore, sending money to the country and how to gain residency.

Culturally, I would say that the key difference between Singapore and, say, Kuala Lumpur, where I started my trip, would be the sense that Singapore is making a statement. Not shouting it from the rooftops, perhaps, but proud of all that it has achieved.

Kuala Lumpur is a grand and wonderful city that grew rapidly out of necessity; it was a key trading stop for tin and later petroleum. Singapore, on the other hand, pulled itself up by the bootstraps after breaking apart from the Malaysian mainland in 1965, and transformed itself from a colonial backwater to a world leader in industries such as trade, finance, telecommunications, and shipping.

This is key to understanding Singaporean people and the culture in Singapore. Remember, this city-state experiment could just as easily have failed than succeeded, but thanks to a combination of “tough love” style leadership from patriarchal leader Lee Kuan Yew, and the unshakeable will of its people to make the most of their independence, Singapore is about as first world as it gets.

Thanks in part to the generous tax breaks and offshore banking services the country provides, you could describe Singapore as a kind of Asian Switzerland – it enjoys the same reputation for cleanliness, order, wealth, and on the negative side of the ledger, being a touch dull if generating serious wealth is not your thing.

But there is far more to Singapore thanks to the industries I have mentioned above, its geographical location as the southernmost tip of Asia, and its Chinese, British, Malay, Dutch and Indian heritage.

So comparisons with Switzerland (or any other so-called tax-haven) are superficial to say the least. Once you get under the skin of Singapore a bit, you start to discover all kinds of wonderful things about the culture.

Here are 10 insights I have gleaned about the city of Singapore and Singaporean culture during my stay here. I may be right, I may be wrong but it’s been fun compiling this list and I would love to hear your thoughts also. Think of this as the start of an ongoing debate.

1/ There’s more to Singapore than Money

Being ambitious and hard-working is seen as an admirable quality in Singapore but contrary to what many people believe, the city is far from all work and no play.

From Chinatown, to the shopping districts of Bugis and Orchard Road, to Sentosa, an island devoted to pleasure (and golf), Singapore is crammed full of tourist attractions and fun things to do.

Cable cars, sky walks, botanical gardens, street food, bars and sports – you won’t be bored for an instant in Singapore. There is a thriving cultural scene too – and it is easy to discover because there are signs and advertisements everywhere. Don’t be afraid to step off the beaten path and follow your instincts. You won’t be disappointed!

If you don’t have the budget for fine dining don’t worry. You will be overwhelmed by the omnipresence of places to eat. There are food hawkers everywhere, catering for every type of food under the sun, from Japanese Ramen and sushi, to Indonesian street food, to Peking duck, dimsum, sandwiches and cake (oh, the cake!). Plus, it’s all available on a budget that suits everyone.

If fine dining is your thing, you won’t be disappointed in that regard either; eleven restaurants in Singapore were awarded their first Michelin Star in 2017, and there are currently 7 restaurants awarded 2 Michelin stars, and one 3 starred; the Joel Robuchon restaurant.

You may, or may not be interested to know that Cristiano Ronaldo and Singaporean billionaire Peter Lim had dinner at Japanese restaurant Kuriya Dining when the footballer-turned global megastar visited Singapore earlier this month. 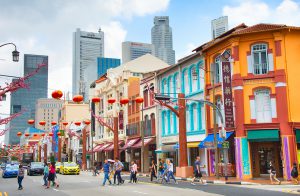 3/ There is plenty to see for free

It would be easy to while away a whole day at Singapore’s botanical gardens, and it won’t cost you a penny. Neither will a trip to the Outdoor Gardens in Bay South, to catch the evening light show. Or you could try the elevated walking trails through Mt Faber, Telok Blangah, Kent Ridge and Hort parks – 10 kilometres in all.

The beaches of Sentosa can be got to at the cost of just a few dollars and there is a free shuttle train to take you back to the main island. There’s the East Coast park, and if you can keep your discipline, window shopping on Orchard Road, one of the world’s great shopping districts can keep you entertained for hours.

So before you head straight to Raffles for a $30 odd dollar Singapore Sling, remember, Singapore offers a whole lot more than a pricey colonial hotel – the Raffles arcade is free too (although not a place for bargain hunters), so earn that cocktail by seeing all there is to see without loosening the purse strings unnecessarily.

Head to the centre of the financial district at lunchtime or home-time, and expect a jostling! This is a busy place where time is of the essence and casual chat not on the agenda – as a traveller, you may find it a dispiriting experience. It does however, liven up considerably after hours.

But why would you head there for a “real” Singapore experience. Short answer, you wouldn’t. Just like you wouldn’t go for a leisurely, chatty lunch in Canary Wharf, London.

Singaporeans are open, friendly people with a great sense of humour – they take an interest in what is around them, and have an opinion on most things. If you are looking to mingle, try the cafes, bars and riverside walks – and don’t be afraid to strike up a convo – you’ll soon feel like one of the locals.

5/ Don’t be surprised if people want to know, or already know, your business

It’s not that Singaporeans are nosy – but the hundreds, if not thousands of high rise condo style dwellings mean that people live on top of one another, in pretty similar circumstances, and they are used to knowing what their neighbours are up to.

What have you got to hide anyway? In fact, everybody in Singapore has secrets, they are just highly skilled at disguising them under intense scrutiny. Try it, you might like it!

This is a big city after all, and people are attuned to looking for external clues about you. They may not have long to make a judgment, after all. As such, projecting the right image is important; even expected of you. Nobody wants to be seen to be letting the side down – a cardinal sin.

So before you stroll out to get your morning coffee and paper in that old t-shirt and those ancient flip-flops, consider if you might want to spruce up a bit. “Attack the day!” as they say. Singaporeans do.

7/ “Face” is everything, Try not to lose it, and certainly don’t make others lose it.

The concept of “Face”, and the losing of face, is a key aspect of Asian culture. Nobody wants to be made to look silly. In the West sarcasm and self-depreciation down is common, but don’t be surprised if your new Singaporean friends struggle with this concept slightly.

Always be positive, try not to disagree with people, and never, ever, lose patience with somebody or lose your temper. Singaporeans will be seriously affronted, and if the offence is serious enough, they may even take retributive action.

That said, Singapore is nowhere as strict or regimented as it is made out to be. Citizens can behave however they like, it just so happens that they tend to behave well and expect the same courtesy from you.

8/ Fashion! You be you, and take pride in your appearance

To reiterate (and the same goes in any big city) Singaporeans can be suspicious of people who do not take pride in their appearance; casualness can easily be mistaken for low self-esteem, which is an unattractive look in Asia and unlikely to endear you to anybody.

Again, be positive, take risks if you like, take an interest – just do something! Give people something to think about – and don’t show your full hand if you can help it. Make people think you know something they don’t. Smile, it makes people wonder what you’ve been up to.

9/ What do Singapore couples fight about?

Heck, social status in Singapore is big! You are most likely to row with your partner if you are not trying hard enough to fit in or get involved.

To reiterate, Singaporeans are hard-working, ambitious, forward thinking and yes, a little intolerant of foolishness and nincompoopery.

But they are also a good fun and humorous bunch. Singaporean life is a constant social theatre, and you may find yourself comparing yourself to people around you a little more than you are comfortable with, but that’s the game and there’s no option but to play it. As long as you make the effort, you will reap the rewards. Not trying is a cardinal sin and means you won’t get much out of out of a city that has so much to offer.

10/ Dealing with the climate

Don’t be surprised if 10 minutes after sitting down in an air-conditioned café sweating like there’s not tomorrow, you are reaching for your sweater. Singapore’s tropical climate means it is relentlessly hot and humid, or raining, and rarely cool. But the culture is indoorsy, and you will find people generally shun the hot weather, and turn up the aircon. If you came to the far east for a tan and sunbathing, you may be surprised at how few Singaporeans are keen to join you.

How many times will you drag a New Yorker to Long Beach, or a Parisian to the banks of the Seine for a tanning session? Don’t expect it to be any easier in Singapore – citizens prefer mental stimulation, or rigorous exercise. So, bring your jogging things or a golf club or tennis racket, and expect to socialise indoors the rest of the time. Unless you are strolling in the botanical gardens or playing games in the park.